Self-Realization So many of the masters have said that …

So many of the masters have said that you are not your thoughts or your emotions, however, it took having a direct experience of this truth for me to understand these words. I came to realize that the truth of our true nature is so much simpler than it is often made out to be. Years of meditation and yoga are not required to recognize that you are already free…indeed, what you truly are is freedom itself.

Coming into recognition of your true nature can be achieved by simply observing your mind and Instantly Zen is a simple method I developed from timeless wisdom, and my own practice, for you to experience this truth directly…within minutes. There’s no work required, and what you discover will allow you to transcend stressful thoughts and open the door to total self-realization.

Indeed, there is no distance between you and your true nature…it is only one’s identification as the sufferer that causes one to suffer. Instantly Zen will help you to know this for yourself. This wisdom will set you free, and I am honored to share the simple steps and guidance to help you experience what took me years of meditation and study, preceding and following a divine encounter with an enlightened master, to realize.

A calm and peaceful presence, Selena Sage embodies Zen. Blessed to be born into a loving family and raised in Austin, Texas, her spiritual education began with the Bible and the Catholic faith. Though very inspired by Jesus Christ, Sage was a curious child and used savings to buy the book “Teachings of the Buddha” by Jack Kornfield, when she was ten years old, after it caught her eye in a half-price bookshop. Nightly readings from this book somehow brought her immediate peace and led to a more earnest study of Buddhism, while still attending Sunday school and church weekly due to a loving agreement with her beloved mother.

What started as a study of Buddhism grew into a study of all of the major religions of the world, throughout her youth, in a quest for truth. While attending Northwestern University, where she studied Engineering and Business, Sage would take weekly trips to read spiritual texts at a nearby Baha’i Temple, between visiting other churches, because the lovingly cared for grounds felt more peaceful to her than the inside of any houses of worship she’d experienced. Sage began to realize that finding ultimate truth had nothing to do with a building.

Not long after graduating, Sage read “Tao: The Pathless Path” by Osho which created another seismic shift in her understanding of true freedom. Soon after, the “Tao te Ching,” Stephen Mitchell translation, became her constant companion.

Years later, Sage moved to California, and a continued and earnest study of Taoism led her to find, and later befriend, a former Taoist monk with an acupuncture practice in Santa Monica. Between twice weekly chi-balancing sessions, Sage and Dr. Wu would have lively discussions about the Tao and his life at the White Cloud Monastery in China. Sage learned Qigong from Dr. Wu and followed his oft-repeated advice to study the wisdom of Taoist sage Lao Tzu. This inspiration was one of the driving forces behind her decision to create a website— selenasage.com — to feature a spiritually-reflective blog in 2013.

Around that time, Sage discovered the magic of Zen and fell in love with the stories and koans posed by masters. The mystical path of Zen created more openness and freedom in her, similar to Taoism, than the structured approach of Zen Buddhism she had initially studied. While studying Zen masters, Sage’s quest to discover the freedom the masters pointed to felt both very near and very far away. However, even without fully understanding the words of the masters, she continued reading every book and story that grabbed her attention and sharing what she learned on her website. Despite the rigors of a busy career in corporate America, wisdom from the masters and her Qigong meditation practice brought her great peace.

Though Sage has traveled throughout the world extensively, it was a trip to Japan in 2015 that proved to be life-changing. Underneath a cherry blossom tree in Tokyo, Sage wondered how she might be an oasis of peace like the tree. That simple thought led to channeling a series of similar questions throughout her subsequent two weeks of travels around Asia. While reviewing the writings in Bali, and feeling incredibly inspired by the Zen-style koans (a paradoxical statement or question used to aid meditation and achieve spiritual awakening), Sage decided to establish Zentao Books to publish the collection in what became her first book, “Meditative Questions: Zen + Tao Inspired.” 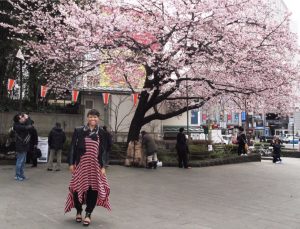 When the printed copies of “Meditative Questions” arrived six months later, Sage decided to walk away from her 12+ year corporate career to share the incredible peace she found by simply questioning her thoughts and beliefs.

In March 2016, a few months after giving talks around the United States, Sage decided to move to the remote island of Santo Antão in Cabo Verde, Africa after visiting and feeling an exhilarating feeling of freedom. Sage let go of everything for that move and chose to continue meditating, writing, and traveling around the world. During the following four years, she published three more books centered around freedom, found here.

In 2017, Sage met Advaita Zen master Mooji in Lisbon, Portugal and in their short meeting experienced an intense moment of illumination that shattered every notion of who she thought she was and gave her a direct experience of the infinite. This direct transmission of truth was so powerful that it led Sage to re-study all of the Buddhist, Zen (especially from Zen Master Bankei), Taoist, and Sufi texts that been so inspiring early in her journey, in addition to The Upanishads and writings by Sri Mooji, Sri Nisargadatta Maharaj, Sri Ramana Maharshi, and Sri Papaji — all of the Advaita path. After meeting and learning from Sri Mooji, all of the writings suddenly became clear.

Three years after meeting Sri Mooji, the entire illusion fell away and the connection to truth became permanent for Sage at last, almost thirty years after purchasing her very first Buddhist book. Inspired to share this wisdom in a new way, Sage began hosting a podcast, “Live Free with Selena Sage,” available here, to share wisdom from the masters, combined with her own experience.

After 3 seasons and 150 episodes of the podcast, four published books, and speaking to audiences around the world, Sage reflected on how to share the truth she had finally recognized even more directly, and Instantly Zen was born. Using the simple 3-step method, Instantly Zen provides immediate freedom from stressful thoughts and direct recognition of one’s true nature. By facilitating live experiences, Sage is able to guide others to recognize the very same truth that took her decades to discover through earnest study and practice. Ultimate freedom is closer than you imagine, and learning the Instantly Zen process from Selena Sage will help you discover it for yourself.